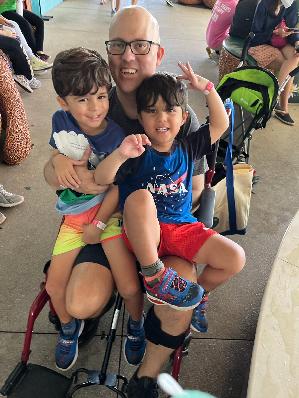 Idrees Danishpajooh was diagnosed with GBM in September 2019. Just after his 40th birthday, without any warning, they found a brain mass. Our quiet life shared with our two beautiful boys, Kiran & Keshav, was devastated. Duke saved his life then, and gave us back everything with one of its clinical trials. He thrived for just under 2 years until the Glioblastoma found a way to destroy this. He fought bravely and he lost his life in August 2022. Not a day goes by where we don't think of Idrees. He was truly a wonderful husband, father, friend, doctor, and human being. This year he won't be there to walk with us, but we will walk and raise money in his honor. Supporting the work of these Duke scientists and doctors while they imagine and create new technologies/medicines to attack glioblastoma is so important. They helped families like mine and will help future families going through this as well. Please join us in ensuring that no other wives and children have to endure such pain of a life lost too early. Fuck gliobastoma!

In memory of Idrees Omar Danishpajooh