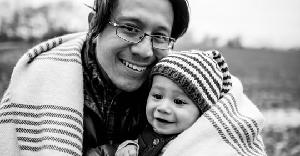 Wilson was diagnosed with a brain tumor in April 2014.  He underwent surgery in Boston where the surgeon was able to remove the tumor.  He underwent chemo and radiation and had clean scans until February 2017.  When he found out the tumor was back he immediately headed to duke.  He qualified for the Polio phase 1 trial in March of 2017. Wilson quality of life was amazing.  In 2017 he attended a summer program at Cornell university and welcomed his only child in October 2017.  Wilson truly lived his life to the fullest and appreciated every little opportunity that was given to him.  In the winter of 2018 Wilson mobility and speech started declining.  At a routine 8 week appointment he learned that 3 more tumors had grown. Two days later on February 6, 2019 Wilson passed away with family by his side. Wilson's fight to beat this cancer didn't stop there, He donated his brain to Duke research in hopes to one day find a cure for this horrible disease. He used to say "If I could only help one person then it would all be worth it"

Please join our team or make a donation to continue the Wilson's fight towards brain cancer!

Feel free to join our team, make a donation online or write a check to Duke University-Angels (put in memo line team shady) mail to