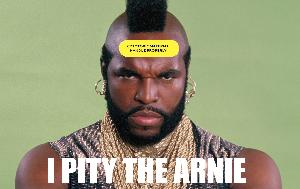 Arnie the Astrocytoma, also known as a grade 2 well-differentiated astrocytoma. Arnie took squatters rights in the dominant temporal lobe of Carrie’s brain. Thankfully, sheer luck and intuition is how Arnie was discovered in early 2012. A close eye was kept on Arnie.  The close eye taught them that Arnie was lazy. This silver lining gave us time to accept the idea of brain surgery. Early 2013, Arnie was biopsied, confirmed the Doctor’s suspicions and then scheduled his eviction.

March 13, 2013 was Arnie’s Apocalypse. Arnie was not able to be 100% annihilated therefore, Arnie's remnants  has permanent residence until a cure is found.

In the meantime,  Duke is doing phenomenal work on a cure. Duke's work has allowed them to have a well-stocked  constantly evolving armory to keep Arnie,others like him and worse, termed a “chronic condition.” Arnie will inevitably  grow again and at that time has a high probability to grow aggressively. The hopeful goal is to be proactive and keep Arnie lazy as long as possible.

In 2017 Arnie was combatted with a small daily low dose of Mr. T (aka: Temodar/Temozolomide) This  was a possible treatment thanks to Duke and their research funded by Angels Among Us.

It’s a simple and smooth story compared to what others endure. Duke is working feverishly to  maintain a strong arsenal to combat and hopefully one day, eliminate all brain tumors. Angels Among Us allows Duke to upkeep and strengthen their supplies on the fight.

100% of all donations go straight to the gifted researchers and directly fuel their amazing studies that allow patients to have Hope that they can put up a good fight and one day conquer brain cancer.

No donation is too small, every dollar makes a difference.
Saint Theresa of Calcutta said it well,” “I alone cannot change the world, but I can cast a stone across the waters to create many ripples.”
Let’s make some ripples!