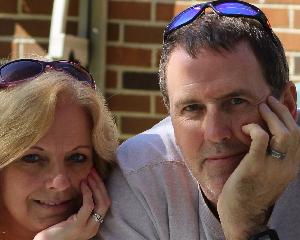 My name is Aron Todd. I am participating in Angels Amoung Us to raise awareness and money for brain tumor research. In May 2013 I had a very severe migraine and was unable to complete my work day. I wanted to go home and just lay down but a coworker informed my wife that I needed to go to ER because I was walking sideways. Being the hardheaded person I am I refused the ER but agreed to Urgent Care. Due to a crazy series of events I took an ambulance ride from the urgent care to Rex Hospital ER. The ER doctor saw something she did not like on my CT scan and ask if I would agree to an MRI. After the MRI she reported she saw a mass and suspected a possible brain tumor and sent me to Raleigh Neurology. They confirmed the mass was indeed a brain tumor and watched yearly with MRI scans for the next 4 years. In July 2017 while traveling to see family suddenly my vision went white and I was unable to tell my wife as I could not speak. This only lasted a few seconds and I went on with my day once again refusing a trip to the ER. Later it was confirmed to be a seizure. We called Raleigh Neurology and made an appointment. After MRI confirmed growth of the tumor we were referred to Dr. Allen Friedman at Duke who after the first appointment confirmed a left frontal diffused astrocytoma and recommended removing the tumor as soon as possible. An awake craniotomy was performed on 9/27/17. All went well and I went home the next day. A short 11 months later Dr. David Ashley delivered the news that to his dismay he had to inform me that some of the residual tumor had started to grow. From that point I received 6 weeks of chemo and radiation. I now receive MRI's bi montly and I am continuing with chemo for the next year one week a month. The entire staff at Preston Robert Tisch Brain Tumor Clinic has been exceptional, I could not have ask for any better care and compassion. I donated my tumor for research and will now donate my time and resources to help others raise money to find a cure for brain tumors.