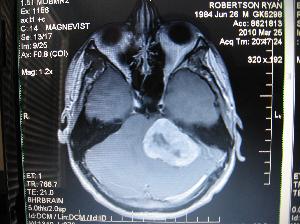 I'm not sure how many people remember March of 2010, but it's a month I'll never forget. I was feeling great, training for some summer races, and even preparing for a big rock climbing trip to Nevada at the end of the month. After going out for a run one day, I noticed that the left side of my face had gone numb. After a few days without feeling, I checked in with my doctor who suggested an MRI. Feeling completely confident that it would turn out to be nothing, I was shocked to learn that, at the age of 25, I had a type of brain tumor called an acoustic neuroma that was about the size of a tennis ball. My doctor suggested that I visit Dr. Allan Friedman at Duke, considered by many to be the top brain surgeon in the world. As you can imagine, Dr. Friedman is incredibly sought after and busy. He wasn't taking any appointments that day, but after seeing my MRI, agreed to meet with me right away. Two months later I underwent brain surgery with Dr. Friedman and another world renowned brain surgeon, Dr. Fukushima, who happened to be teaching as an adjunct professor at Duke. The surgery was scheduled to take around 6hrs but ended up lasting 13 as the doctors worked with meticulous precision trying not to damage nerves that could have left my face permanently paralyzed. Thanks to their skill, expertise, and precision I came out of the surgery with great results. The entire team that worked with me at the Duke Brain Tumor Center was phenomenal. Within a couple months of surgery I was back to running, rock climbing, and working my way through graduate school classes. I'm sure that at any other facility, the results of my surgery wouldn't have been nearly as successful.
I was incredibly thankful to have this world-class facility just a few miles down the street. Beyond the high caliber of everyone I've had the pleasure to encounter at Duke, the thing that impressed me most was their level of knowledge, skill, and teamwork. Their cutting edge research and technology gave me confidence that everything would work out. I would wish the same peace of mind for anyone diagnosed with a brain tumor.