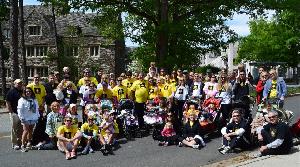 At age twenty-six, I found myself suffering from relentless, pounding headaches which, according to myself and any other rational thinking person,it had to be migraines.  Had to be.  After continued, increased attacks, coupled with what can best be described as walking black outs, I went to the emergency room. After a CT scan, the news of a golf ball sized mass on the back of my cerebellum came as a shock, but not a surprise.

After eight hours of surgery, the mass was completely resected.    During this surgery, my medical team discovered the mass was a cancerous tumor known as Medulloblastoma (scary name).  This cancer exists in the brain and spine. Devastated and terrified, my family and I prepared for the worst.  I took it as a personal attack from a cruel, cowardly, criminal bully who had no idea who he was messing with.

The best decision made was to seek treatment at The Preston Robert Tisch Brain Tumor Center at Duke Hospital. As a preventive measure, a plan of radiation to the brain and spine was put into action.  Two years later, a recurrence in my bones called for intensive chemo therapy and localized radiation.  Finally, after another bout with bone cancer and a year of leukemia,  I am in remission, feeling good and happily married to the woman who's been right next me since 2011.

In the care of such brilliant physicians and researchers, I was able to make it out alive.  I am around and doing well eleven  years later.  My life has been forever changed by cancer, and because of my experience, I am automatically wired to fight for myself and anyone facing adversity from this aggressive disease.

Once, while either being carted or wheeled through Duke, I had my first sighting of children no older than 10 battling brain cancer and taking on chemo and full brain and spine radiation.  If ever there was a moment of complete shock, sadness, horror,and rage; this was it.

I was twenty-seven when this all started.  And to be honest, I had lived a pretty charmed life.    These babies, these kids, knew nothing of normality.   Instead of playdates, preschool, Christmas pageants and swim meets, they knew chemo, vomit, hair loss, needles, tears and pain.   I can accept myself taking a beating from brain cancer, but not the little ones.

This is why Angels Among Us means so much to me.   Suffering is something no human should have to endure.  In 2008, with friends and family, the Dan De Lions were formed to raise money and awareness for The Preston Robert Tisch Center at Duke Hospital.  Over the years we have raised over 100K for the cause, and will not and cannot stop.

Things are happening at The Tisch Center that are changing the face of brain cancer, and the faces of those suffering from its ravages. Help them help those in need and those in pain.   Help the doctors, surgeons and researches at Duke Hospital eradicate brain cancer.

With all the love in the world,