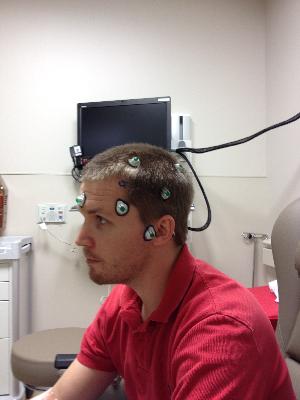 For those who do not know the story, here it is... On December 19, 2013, while watching A Christmas Carol at DPAC, I had my first ever siezure about thirty minutes into the play.  I'm told DPAC staff and fellow audience members, including a nurse who was luckily nearby, quickly assisted me and EMTs.  Next thing I remember, I am in an ambulance heading to the hospital, to ultimately hang out in an ER bay all night.  A CT scan that night revealed what appeared to be a shadow on my brain, and an MRI the next morning confirmed this was a tumor.  At that point I was referred to neurosurgeon Dr. Allan Friedman at Duke, who assessed my MRI results and recommended surgery to remove the clementine-sized tumor.  My surgery was on January 2, 2014 - a strange experience, as I had to be awake for portions of the surgery to gauge the portions of brain tissue being removed.  I spent two nights in the hospital - one night prior to surgery and one night after - then went home to continue my recovery, which included physical therapy for impacted areas on my right side.  I had 65 staples at my incision, which were no fun at all to have removed.

Following the surgery, full genetic analysis was completed on the tumor cells and I finally recieved the official diagnosis, a grade 3 anaplastic oligoastrocytoma.  After the incision had healed I began treatment, which was 35 days of radiation along with chemo every day.  Once the radiation course was complete, I did 12 months of chemo cycles.  As of the end of this course of treatment, my MRI showed no evidence of disease.  I have continued to have MRIs and checkups at the brain tumor clininc, and now am scheduled for bi-annual MRIs and visits to my oncologist, Dr. Katherine Peters.

The teams of doctors and nurses at Duke and the Tisch Brain Tumor Center have cared for me exceptionally well and it's because of them I am where I am today.  Researchers and doctors at Duke have also been developing cutting edge treatments and implementing clinical trials, which include a trial treatment for the exact diagnosis I recieved (using specific genetic markers to target cells).  Please join me in raising funds for the Tisch Brain Tumor Center so that this research can continue and patients can receive the care I have been so lucky to have.