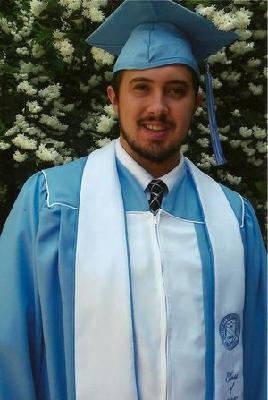 Connor David Michos, 23, died Sunday, Jan. 29. He was born in Cleveland, Ohio to John and Andrea Michos. The family moved to Hillsborough in 2006. He attended church at Hillsborough United Methodist and New Horizon. Connor was a proud member of Boy Scout troop 438, achieving Eagle Scout. He attended Orange High School and graduated from Cedar Ridge High School as an International Baccalaureate student in 2012. He was proud to be accepted at UNC-Chapel Hill and graduated in 2016 from the School of Information and Library Science. He began his career as a data engineer with Fidelity Investments in September 2016.
In March 2016, Connor was diagnosed with a cancerous brain tumor, which claimed his life. He was an avid sports and music fan and great UNC Tarheel supporter. The time we all spent watching the week’s games, listening to 80’s rock, and following Tarheel and Cleveland team sports, will sorely be missed. He touched many lives everywhere he went.
Connor is survived by his parents Andrea and John Michos, sister Morgan, grandmother Barbara Auman, uncles Joe Auman and David Michos, aunts Nicola Smart Auman, Kate Pushon, and Susan Veleba Michos, and his cousins Noah, Hope, Tim, Matt, Mark, Christine, Paul and Linsey.
In lieu of flowers, you may support the fight against cancer and fund the Duke Tisch Brain Tumor Center- Angels Among Us Walk on April 29th with a donation to Connor’s Heel Raisers team