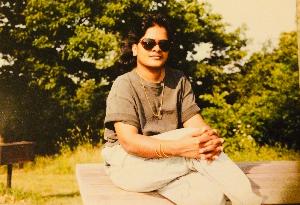 It is so hard to believe that this will be year 8 of getting the team together in honor of my mom and all those who have and/or are now suffering from brain cancer. This year's event will be Saturday, April 22, 2023 which is also the 30th Anniversary of 'Angels Among Us'.

For those of you who may not know, my mom, Sara Vergis, suffered a massive stroke in February of 2015 and was subsequently diagnosed with stage IV brain cancer in June of 2015. After a courageous fight, she passed on September 1st, 2015. Sara was known for her strength, humor, diligence, kind heart and vivacious laugh. She spent 32 years as a social worker, first for children in foster care and adoption, and then as an advocate for seniors. Giving and caring for others was her mission in life and I hope to continue her work by assisting in the fight against brain cancer. I was blessed to have her as a mother and love sharing the memories of her with all of you every time we get together.

Some of you may be asking why "Varg" instead of "Vergis".  The hilarious story behind the name "Mama Varg" came from my friends at Duke who took a funny typo of my last name and ran with it. The rest is history.

We do have some serious competitors on this team, but walking is alway allowed during the 5k. Do whatever feels best to you! We will have food/bev post race like always.

Thanks to each of you for what you are willing and able to do in this important fight against Brain Cancer.