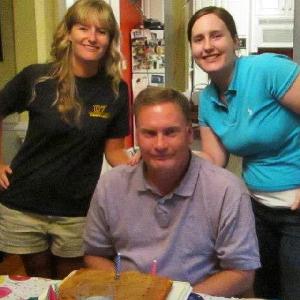 I was sitting on the couch with my sweet daddy when he first talked about starting the team. My family and I had just entered the world of brain cancer-of chemo, radation, and the heartbreaking reality of how short time really can be. Dad told me that it was a great idea- and we came up with the team name "Hawkeyes" after a nickname he got when he was playing football in high school.

My daddy faught harder than I have ever seen any human fight before. I say it every year but its important that it is said how he faught with grace- he never once in all the pain that he was iin complain not once- and through those 6 months faught like a superhero he was and kept us laughing until the very end.

I can not say enough how proud I am of him..how proud I have always been to call him my daddy. There is a very loud absences in our lives and I do this race every year in his honor and in his sweet memory- that all that he did and faught for would not be in vain.

I promised to always run it for him to raise money for research about such a horrible thing that so little is still known about and to now fight this fight for him.

Thank you from the bottom of my heart.