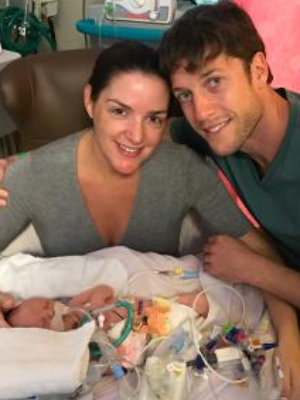 I'm fundraising to support of all the new families just entering their NICU journey. Here is ours.

10 hours after Ethan was born, I was finally able to meet him. But I was told I had to say goodbye. That was the hardest moment of my entire life. I have never really told Ethan's story publicly as it is still very hard to talk about. Ethan is a true miracle and amazes me each day.

Giving back to other families going through their own NICU journey is my WHY and the reason that we are here.

My goal is to renovate the Family Care room in the Duke Intensive Care Nursery where Ethan spent 79 days. This will provide families a comforting environment where they are able to spend those precocious moments with their newborn.

Early in my pregnancy during our 20 week anatomy scan, they noticed Ethan's kidneys looked enlarged. We followed up with several ultrasounds, each one confirming there was a blockage and worsening damage. At 28 weeks, I was hospitalized for having no amniotic fluid from the blockage. They did a procedure while he was still in my belly to remove some excess fluid. Additional procedures were discussed but the risks were just too high. The amazing Maternal Fetal Medicine team worked with the Urologists, Nephrologists, and Neonatologists to develop a plan to give Ethan the best chance. While we waited, we were faced with the fact that this could mean palliative care. It was something that didn't really register with me at that point.

Ethan was born via a scheduled c-section to Bob Marley playing in the background. Whenever I would get emotional about our situation, this song just happened to play. "Don't worry about a thing, ‘cause every little thing is gonna be alright". It became our motto during his journey.

The NICU team immediately took Ethan away upon birth, needing to intubate him. While I recovered, we waited for an update. And I waited to meet my son. The Neonatologist would come in and update us over the course of several hours of his progress, which was not good. Finally at 2 am, 10 hours after he was born and numerous surgeries, we were told that he wasn't going to make it through the night. We called our parents and had to tell them to come meet him and to also say goodbye. Even after all the doctors told us early on that there was a chance he would not survive, it doesn't prepare you for that moment. Standing over him and seeing him for the first time to say goodbye and not even being able to pick him up or hold him was the hardest thing I have ever had to do.

As we gathered to meet him, Ethan unexpectedly showed the slightest sign of improvement. I think he could feel us and knew he had to fight harder. Over the next few days, there were several tests, scans, blood transfusions, and continuing diagnostics. But only to determine that his lungs and kidneys were not strong enough. Our goal at that time was to get him to a point where I could hold him and spend some quality time with him while we said goodbye.

This is my “WHY?”.  To help other families by providing an environment that is comforting to have these final moments. We spent so much time preparing for that moment so that when it arrived, I would only need to focus on him.

As the days turned into weeks, Ethan refused to give up. He continued to fight, beat the odds and overcome each obstacle that was put in front of him. The name Ethan means strong and long lived. Little did we know what a perfect name we had picked for him. The long months in the NICU were very scary. Every day was an emotional roller coaster. When Ethan finally became strong enough to come off of the ventilator, he got sick and became septic. He had to be resuscitated twice until they could get him back on the ventilator. He needed an emergency operation but the doctors were worried that he was too sick to make it through the procedure. But he was strong, of course. We had to start the weaning process again to get off of the ventilator. He did just in time for Halloween where we dressed him up as Bob Marley.

As Ethan gained some strength in the NICU, he had surgery to remove the blockage in his ureter and the surgery was a success! Each day Ethan got stronger and stronger. He still needed oxygen through a nasal cannula and a feeding tube, while slowly weaning him off all of the medications. Finally after 79 days, they felt he was strong enough to finally come home.

Ethan's Journey did not end after we brought him home. He had a feeding tube, he was diagnosed with hip dysplasia and had to have several surgeries and was in a body cast for 3 months followed by a brace. He also had strabismus surgery for his eyes. We continue to monitor his Kidney Disease and PT and OT services for his development. But if you look at him now, this cute adorable little 2 year old boy with blonde hair and blue eyes, you don't see his journey or his fight for life. Instead you just see the cutest kid with dimples and a smile that you can feel with your heart.

He would not be here without the amazing team of doctors and nurses who cared for him and the power of prayer that came from all around this world. For all those that have prayed for him, we are forever grateful.

Thank you for all the continued support and for helping us help other families.